Since we have so many photos from all of our events, they can be accessed via the links below, it will take you to Flickr a photo storage site. 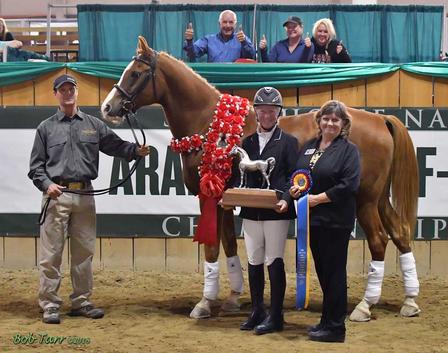 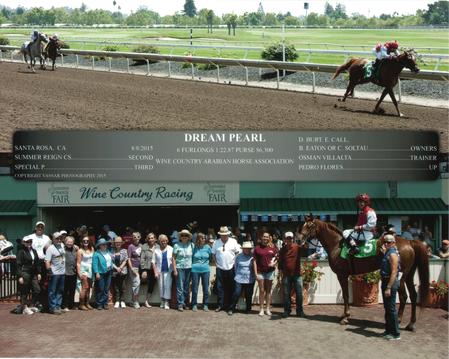 Day at the Races

Youth Members demonstrated the versatility of the Arabian Horse.

To Order any pictures

Thank you to Kelly Kenneally for the Awesome Photos  www.kellykenneallyphotography.com

HoofBeats in the Vineyard at Shone Farm 2016

Sue Curry Shaffer is founder and co-owner with husband Dyke Shaffer of Fairwind Farm in Santa Rosa. She has, throughout the years, made countless contributions to the evolution of Sonoma County as a mecca for equines and equestrians and a haven for sporthorse trainers and their students.

Sue discovered her passion for horses as a child.  She bought her first horse, a paint named Ranger, for $300 with her own money and then worked at the barn to pay his board. As she grew as a horsewoman her love and talent for dressage blossomed. Working with a low budget, she took horses others viewed as unsuitable and trained and competed them up the levels successfully. Then, while leasing a farm in Golden, Colorado she met Jody Ambrose, when Jody was only 13 and, this began a long term wonderful relationship which still remains strong. Through the generous support of Jodys family, Orpheus was purchased, and in  1985 the pair reached #1 in the US Dressage Federation rankings at Prix St. Georges, was invited to Gladstone, and then long-listed for the World Championships. Competing at the FEI levels for over 20 years, Sue brought multiple horses to rank in the top ten nationally.

Committed to continuous learning and development, Sue has a broad scope of accomplishments.  She holds a degree in Equine Science from Lake Erie College. She is a  USEF "S" Dressage Judge and has FEI ***Para Equestrian desigination.  In 2017, after apprenticing Sue was accepted as one of the 12 members of the L Faculty.   The “L” program provides a comprehensive foundation not only for aspiring judges but also for riders, trainers and other dressage enthusiasts. Concurrently with her judging and training activities, Sue became a successful breeder of Oldenburg’s with her foundation stallion Donnerschlag (Donnerhall X Pirola (Pik König)).  She hosted many inspections at Fairwind Farm, thus facilitating the breeding and approval of American-bred Oldenburgs.  Many Donnerschlag offspring are now competing at the FEI level.

With all of her heady achievements, what Sue loves to do is teach.  She has helped many of her riders qualify for and win Regional and State Championship and multiple students to earn their Bronze, Silver, and Gold Medals.  Her generosity with her time and expertise is boundless. Irrespective of your level or skills, the breed or quality of the horse, or your desire to compete or not, she is anxious to impart to you and your mount with empathy and encouragement the benefits of dressage training.  Riders come from throughout Sonoma County and the region to train and clinic with her.

Sue manages Fairwind Farm as an asset for the community hosting local clinics and competitions there as well as housing professional dressage and eventing trainers and their clients.  She lends her expertise and support to local organizations and events, including the Wine Country Arabian Horse Association and Dressage in the Wine Country.

Sue’s love of animals extends to all creatures -- from rescued dogs and cats to chickens and occasionally, humans.  Her animals have a forever home with love and good care, including her retired broodmares and until recently her beloved stallion, Donnerschlag who passed away at age 30.

Throughout her illustrious career, Sue has developed a keen sense of humor.  In her March 2014 Dressage Today article, Sue offers responses she would give today to questions she found “hilarious or mind-blowing or both” had she developed her sense of humor earlier.  Her multiple examples include this one:

Question: Can someone cut up six Fuji apples for my horse each morning?
Answer: No. We only provide Gala, Granny Smith and Pink Lady apples.

Clearly, Sue Curry Shaffer, an asset to Sonoma County and the world of dressage, has remained humble, kind and down-to-earth and is more than worthy of the Sonoma County Horse Council 2018 Equus Award.

Congratulations to Terry Benedetti on her US Sport Horse National Champion. 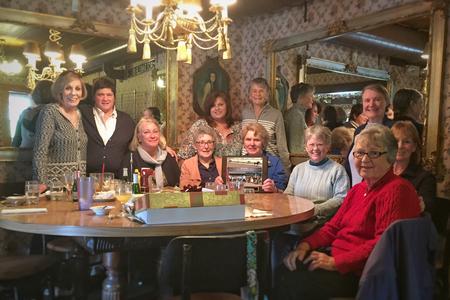 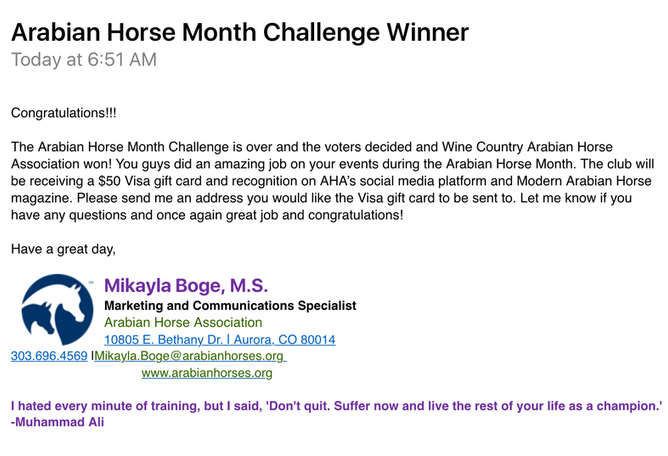 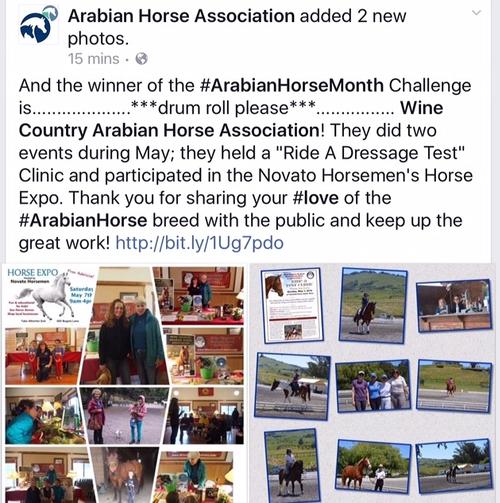 Held at the Flamingo Hotel (Thank you Pierre)